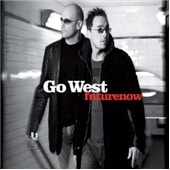 'Futurenow' is the fifth album from Go West and comes sixteen years since their last studio release, 1992's 'Indian Summer'. Peter Cox and Richard Drummie return to the classic mix of rock, pop and R&B that propelled them to stardom throughout the eighties and into the early nineties, earning them numerous UK top 40 hits and helping them break into the lucrative American market. The single 'Let Love Come' is also featured.